– Reduces choice for the passengers, when most routes from their stop run in the same direction and no route runs to where they want to go.

As a result, the attractiveness of public transport falls, compared to private transport.

b) Suboptimal division of transport tasks between rail-based and bus transport: my experience suggests that the most efficient public transport networks have trams and/or trains (suburban rail, metro or light rail) as their backbone with buses supporting them.

Rail-based transport is most suitable to carrying large numbers of passengers over large distances in the shortest possible time, while buses work very well on relatively short routes, e.g. feeding passengers to a rail-based line and in areas where a tram or rail line would not be feasible (due to low passenger demand or geographical obstacles).

Buses and trams or trains can cooperate (instead of competing) if their specific advantages are recognised and fully used – thus leading to a highly efficient network, which attracts more passengers.

An optimal – in my view – division of transport tasks between rail-based means of transport and buses is a feeder system shown below. 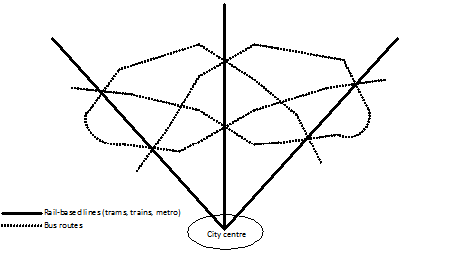 My name is Artur Zawadzki, I support institutions in their efforts to increase value for money invested in public transport.
Read more →